This is just a quick announcement to say that we’ve moved our blog from blog.cryptpad.fr to blog.cryptpad.org. Visitors to the old URL will be automatically redirected to the new one. Anyone who has subscribed to its RSS feed will continue to get updates for the new address.

This blog is the first of a few services that we plan to host under the CryptPad.org domain. Our goal is to provide some better separation between CryptPad (the open-source project) and CryptPad.fr (the public instance that we host). In the near future we plan to introduce a project website featuring general information, an overview of our roadmap and finances, and a directory of public instances.

This month the team has been operating at reduced capacity as we took turns taking much needed breaks. There is less than usual to report on so this status update will be a short one. Rest assured however that lots of things are in preparation for the near future.

We released CryptPad version 4.10.0 with some inital improvements to Forms.

August was the time for the yearly XWiki seminar (held mostly virtually again this year). During the traditional hackathon sprint we worked on presenting Form responses in a more appealing and useful way, using basic bar charts. 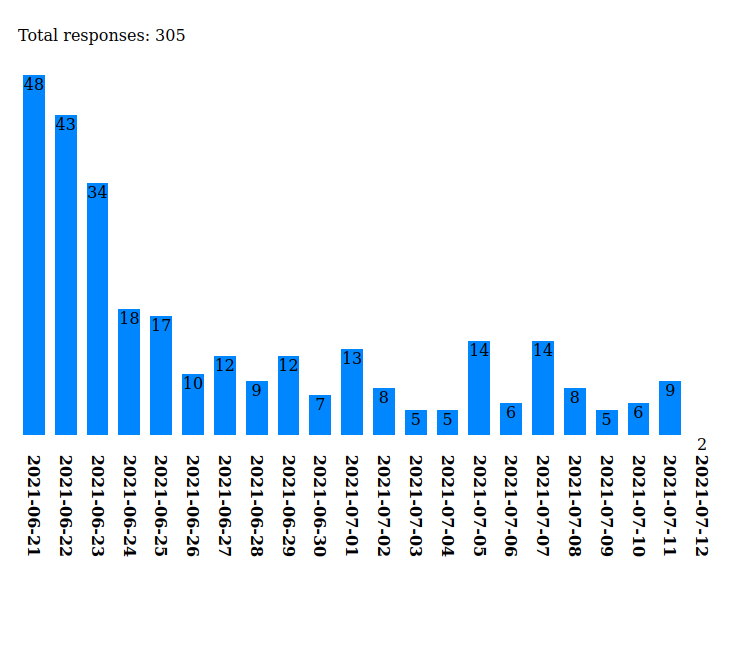 We experimented with Charts.css at first, and were impressed. In the end there were too many tweaks necessary to make it work with CryptPad styles, so we ended up re-implementing our own minimal table-based bar charts. These are now used on the response page to show a timeline of responses and visualise question results. 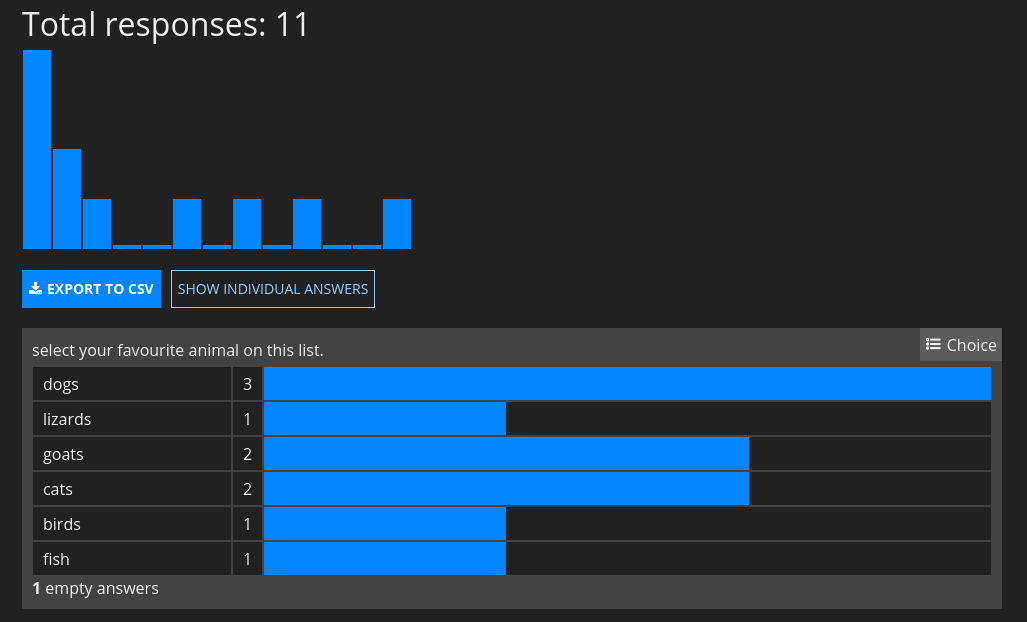 We will re-use these charts where relevant on the rest of the platform. For example the admin panel now shows a graph of instance performance.

There is a lot more coming to Forms. We are currently working on a host of new features and improvements to address issues and requests raised during our research over the summer. All of this will be covered in next month’s post (hopefully), for now I will leave you with this teaser:

As you may have noticed, the image above is embedded from the @cryptpad_design account on Pixelfed. This is a new experiment in communicating about the design work that goes into CrytpPad. Pixelfed is part of the fediverse, so you can follow from accounts on Mastodon, Pleroma, etc (there is also an RSS feed). Followers will get sneak previews of upcoming features, random screenshots, and highlights of FOSS design tools. Subscribe if that sounds interesting to you.

This wraps up our news for this month. The team is busy with Forms v2 and there will be lots to talk about in the near future. In the meantime, our research survey about document import/export is still open for feedback to inform our future work improving document conversions.

This month we released two versions of CryptPad. 4.8.0 included some early work on INTEROFFICE format conversions. 4.9.0 addressed some early feedback on the Forms application as well as requests for a way to add links (URLs) to the Drive and to share them with contacts.

During both release cycles, since the launch of Forms last month, we have been conducting a lot of research. First about the use of the Forms application itself, and now also to inform work on INTEROFFICE. 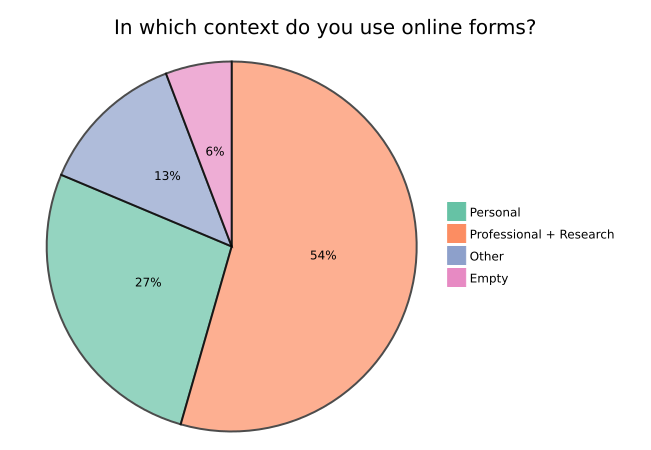 The first thing we did after launching the new Forms application was to use it to survey people on cryptpad.fr. We asked them about their use of online forms and recruited some volunteers for one-to-one interviews. These are still ongoing. Once they are complete and analyzed, we will use all of the findings to inform the next round of developments on Forms.

In the meantime, 4.9.0 included some minor improvements (e.g. randomizing ordered-list questions) and bug fixes based on early feedback. Unfortunately one of the bugs affected our own survey about file import/export (see next section). We found that setting an expiration date far enough into the future (above 23 days) caused the Submit button to disappear. So if you filled it out and weren’t able to submit, know that this is now fixed!

We have started work on INTEROFFICE, our project about improving conversion between document formats in CryptPad (and in the browser in general). We already have some knowledge of requested conversions from a couple years worth of support tickets and feature requests. However after seeing the relatively high number of responses to the Forms survey (300+), we decided to conduct one for file import/export to get even more insight into what people use and request.

The File import/export survey will be open until the 8th of September. Please fill it out if you haven’t already, and now you can actually submit!

The work on INTEROFFICE also includes a series of business mentoring sessions as part of the DAPSI project. This month we started putting some of the advice received into practice by preparing a new project website that we hope to launch this fall. This will include a list of public instances to share the load of free users with cryptpad.fr. The project site will be separate from the flagship instance and it will offer a range of services to host your own instance, from one day installation help to fully managed service. 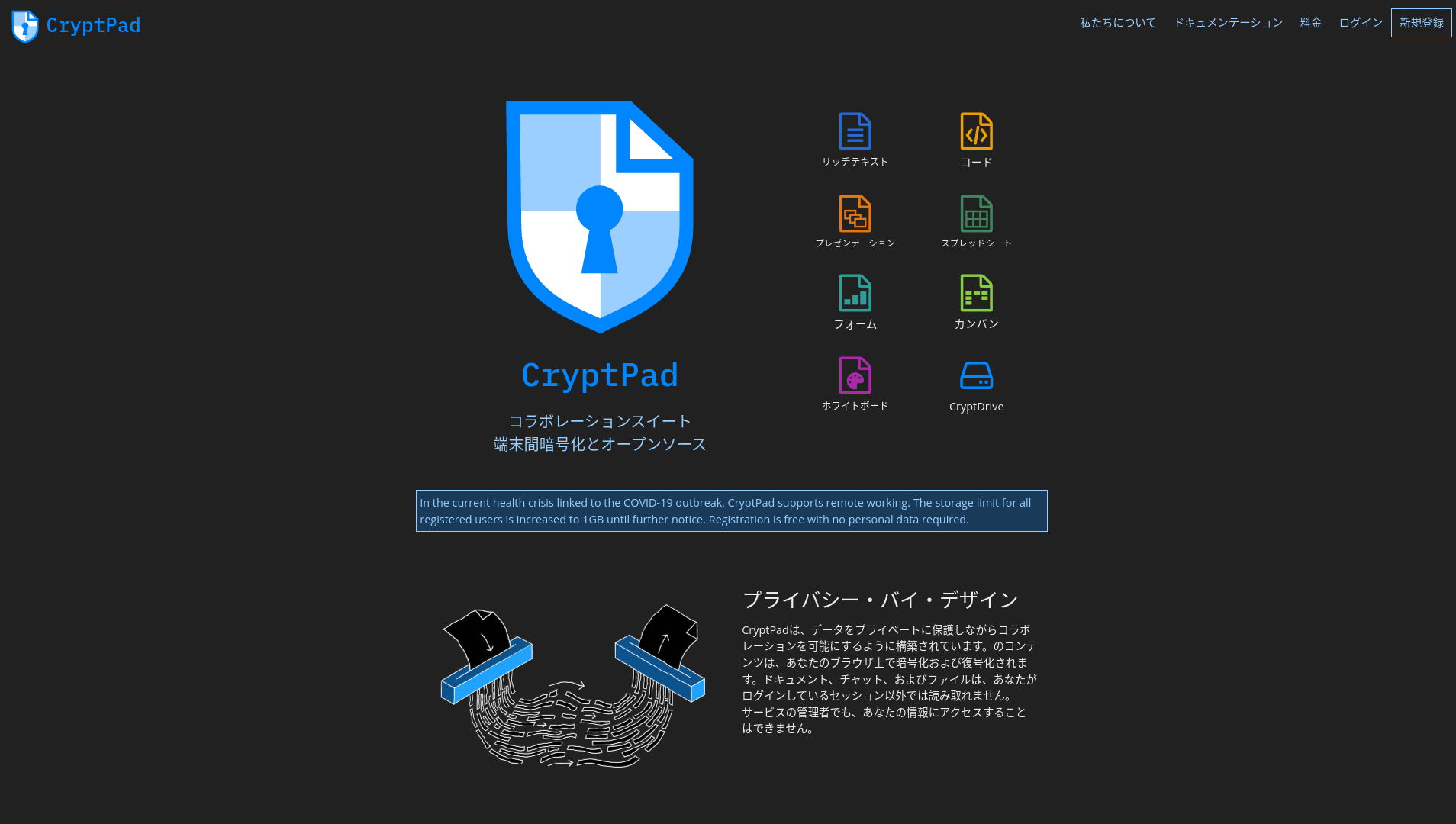 🇯🇵 CryptPad is now fully translated to Japanese. Big thanks to @suguru@mstdn.progressiv.dev for all the work!

This wraps up our news for the month. The coming cycle will be on the quiet side as the team takes turns taking much needed breaks.

This month we released two versions of CryptPad. 4.6 was a stability update addressing many minor issues while the team prepared for 4.7 and a major new feature: the new Forms application. 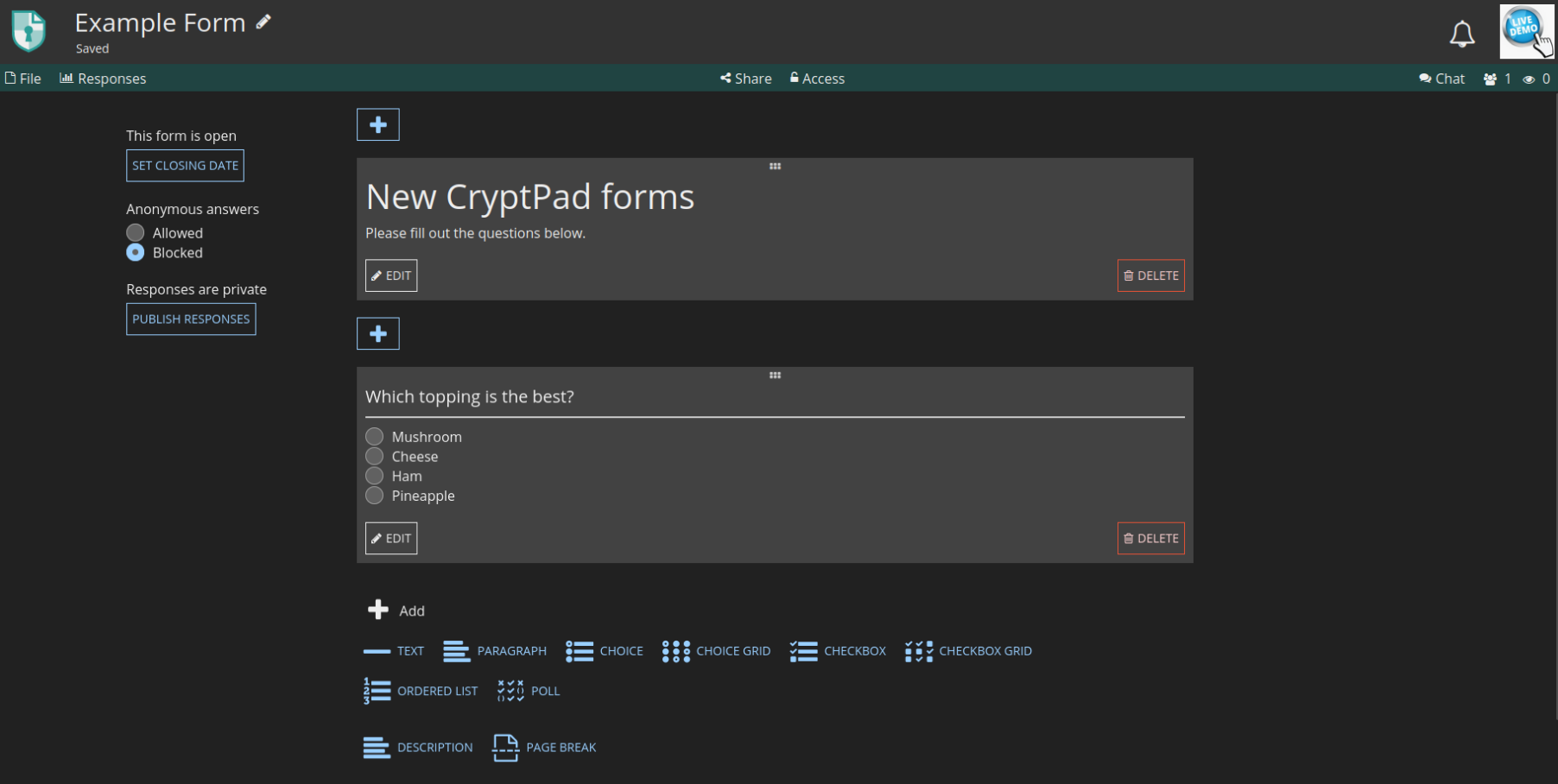 The Poll application in CryptPad was aimed at choosing a meeting date between a group of people. However it had some major shortcomings including “all or nothing” edit rights where participants could modify other people’s answers. Part of our Dialogue project proposal was to address these issues in a complete re-write of the application. Another aspect of the project aims to provide a new application for online surveys beyond simple polls.

The new Form application is an answer to both of these proposals. Polls are now one of 8 question types that can be added to an online form. Earlier in the project we spun out the reminders API element of forms into a full blown calendar app. With Forms we are merging a variety of use cases into one application. As we have indicated polls created with the old application remain available, but the creation of new ones is discouraged and all our future development efforts will be directed at Forms.

We released the first Beta version of forms with CryptPad 4.7.0 (on June 16th). There are many things we still want to improve, including:

We are gathering feedback on these and anything else that might be improved, using the Form app itself for a feedback survey that is open until July 12th. Please let us know of any comments on the application and what you would like to see improved, especially if you use online forms regularly. We really appreciate the time of nearly 100 people who have already sent in their comments. These will inform our work as we improve Forms this summer.

Details on how to use the Form application are available in the CryptPad User Guide.

A call to instance administrators

This month we sent out our first—and last—mass email to CryptPad instance administrators. This was a strange feeling for a team that spends most of its time working on ways to not know anything about its users. However we felt that version 4.7.0 was a good time to remind all admins to upgrade to latest version, and to ask for their consent for future communications as this is now managed directly from the admin panel.

First of all, how did we have their email? The configuration for a new instance includes providing an email contact for the administrator, and this is sent to the development team in the daily “ping” that lets us know how many declared CryptPad instances are active. This is all detailed in the configuration file that admins read when setting up their instance.

In both releases this month we have made improvements to the administration panel of CryptPad instances. More settings, such as the setup for the Support ticket mailbox, are now available from the panel rather than buried in configuration files. This also includes new settings for administrators to manage how they communicate (or not) with the development team.

The “mass email” was to encourage all administrators to upgrade to the latest 4.7.0 version in order to 1) benefit from all of the new features and security improvements made to CryptPad in the last few months (or years depending on the version they were on) and 2) manage further communication with the development team going forward. These communications will include security notifications and other things such as inclusion in a directory of open instances that we are working on setting up.

There is one last bit of news to wrap up: CryptPad is now included in Catalogue GouvTech, a software directory curated by the French state

The next month will be spent improving Forms and starting work on our INTEROFFICE project for DAPSI, working towards improved import/export and document conversions from within CryptPad.

This month we released CryptPad 4.5.0, featuring the public debut of the Calendar application that was in beta since 4.4.0.

We reached a couple of milestones this month with over 100K registered users on cryptpad.fr, the end of the Communities project, and the start of Interoffice (DAPSI). 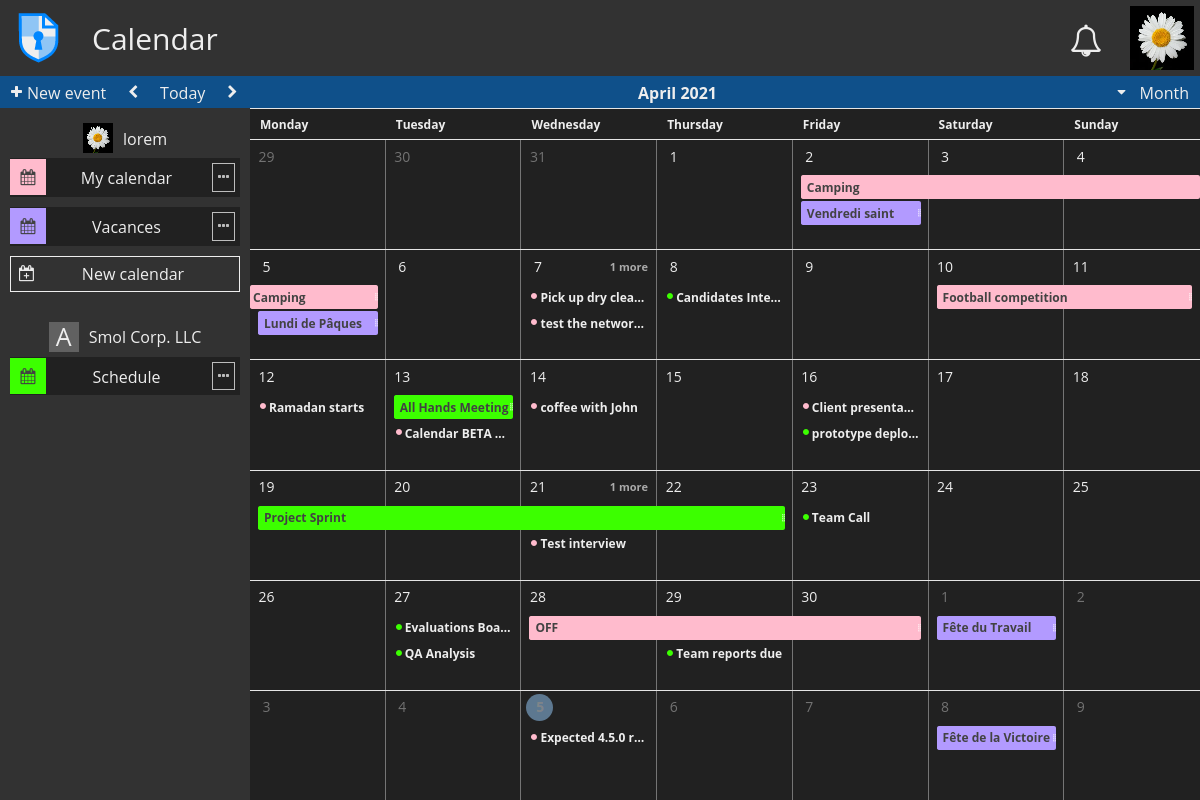 Wrapping up the Communities project

Besides Calendars, CryptPad 4.5.0 also introduced restricted registrations for administrators who want to limit access to their instance.

On the documentation side, version 4.5.0 was in fact the first complete release with all three guides: User, Developer, and the new Administrator guide with instructions to install and maintain a CryptPad instance in production. Additionally, admins can now check that their installation is complete and well configured with an improved /checkup/ page.

The documentation GitHub repo remains open for feedback and/or contributions, and please see Weblate for translations of the User Guide (note that the developer and admin guides are in English only to keep translation of the user guide manageable).

Restricted registrations and the admin guide were the remaining two deliverables for the Communities project. For a summary of all features implemented for this project over the last few months, visit our public roadmap and filter with the “communities” tag.

While we are on the topic of wrapping up projects, Aaron took part in the 6th NGI TRUST Results Webinar and summarised our work for that project which we completed last February

With some projects completed we can now turn another major milestone ahead: the Dialogue project and a new app: Forms. This will allow for the creation of surveys and questionnaires with use-cases ranging from finding a meeting date to conducting research in a secure and private manner. We are only in the initial stages of development but once completed the Forms app will gradually replace our current Polls and their many shortcomings (such as anyone being able to modify anyone else’s answers). If you use Polls currently, rest assured that the new app will provide the same functionality and more. The migration strategy remains to be finalised but existing Polls will remain available through the transition.

Finally, the team took part in a couple of events this month. Ludovic Dubost was interviewed about INTEROFFICE, our upcoming project as part of the DAPSI grant.

CryptPad was featured as part the of the 3rd Workshop on Obfuscation, a fascinating online event running on open-source software. We presented the poster below in the exhibition space. Click for the PDF version. 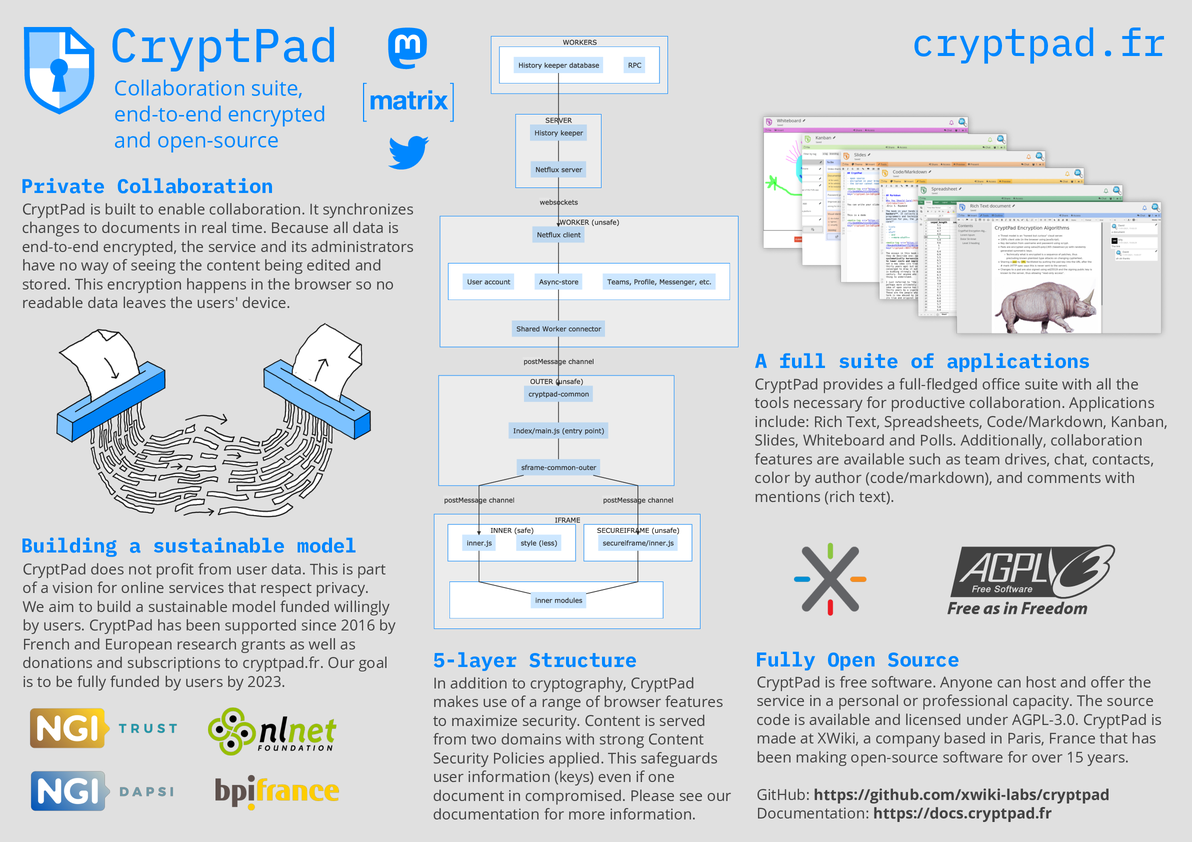